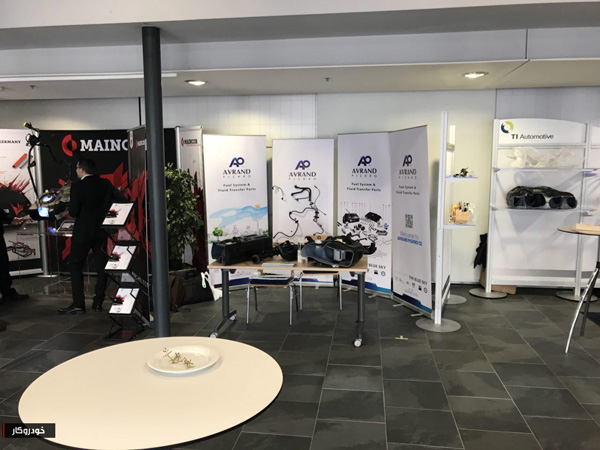 The Avrand Pishro artcile, which was accepted at the International Tank Tech Conference, was presented on the second day of the conference. Avrand Pishro delegates have presented their achievements over the past two years. The paper examines the modeling, simulation and optimization of the jet pump in the fuel transfer module (fuel pump).

The automakers and suppliers of fueling systems come together at the Tank Tech conference every two years to share the latest achievements in the field of fueling systems and catalysts. This year, the two-day conference was held on November 2 and 3 in Munich, Germany. In addition to major international automakers, the event will feature major manufacturers from around the world to exchange information on the latest breakthroughs in the fuelling system, while communicating effectively and efficiently. Companies such as Volkswagen, Toyota, BMW, Daimler, Mercedes Benz and more, attend the event. Avrand was the only group that participated in the event in Iran as the representative.

The Tank Tech conference can be considered as one of the most important events in the field of fueling system. Every year, along with this conference, an extra exhibition will also be held. Avrand Pishro as the biggest automotive fueling industry in the country, has had an active participation in the six recent events, and this year the company presented an article for the first time. The article of Avrand Pishro engineering team, previously presented and accepted by the academy, was presented on the second day in accordance with the plan and the representatives of the company presented their achievements. This paper studies modeling, simulation and optimization of jet pump in fuel transfer module (fuel pump). A review of computer results and actual data were offered and finally its validity was checked.

Avrand Pishro’s emphasis on research and development (R & D) and the company’s accentuation to the technology of the day is one of the most important factors in the company’s success. Avrand Pishro is still developing its commodity bundle, despite its already superior position in the automotive fuel market in the country. It is worth mentioning that the company has recently added the catalyst to the product portfolio.